Learning as I Go

Like any other profession, there are types of writers. Zadie Smith, an English author of White Teeth, The Autograph Man and On Beauty among other novels, summarizes the types I most relate to in an article on www.brainpickings.org:


"I want to offer you a pair of ugly terms for two breeds of novelist: the Macro Planner and the Micro Manager."

Smith defines a Macro Planner as a writer who writes with the help of copious amounts of notes, and makes all kinds of drastic changes as she goes along, sometimes adding to the beginning, or the end to complete the book piece by piece. A Micro Manager starts at the beginning and writes until the end, the story coming together as it unfolds, in chronological order. 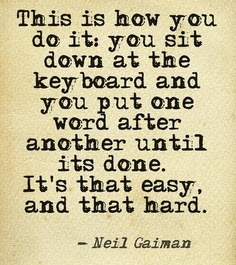 Before going to graduate school I was a Micro Manager. I started my story at the beginning and worked until the end. I made sure that every sentence, every character and scene was exactly as I wanted before moving on. I could take days on the first few chapters. Mostly I did that because I wanted the beginning to be perfect, but also because I didn't always know what was going to happen next so I'd tinker with what I knew before tackling what I hadn't yet figured out. Many times I was writing with no time constraints, except when I wrote Life Books for foster kids, or wrote to enter a writing contest. I had all the time in the world to slug along, perfecting as I went.

That's the approach I took when I started graduate school. My first packet was short stories because I had a 30 day window to get the writing done and I knew I could crank out some short stories from beginning to end. I wasn't so sure about starting a novel in that time. I sat and wrote from opening line to THE END. I made some edits here and there, but pretty much wrote sequentially.

The feedback I got back from my advisor surprised me. She asked me where my story started. I looked the document I sent her. It was clearly marked with a page 1. Don't stories start on the first page? Of course, I couldn't respond with that. I was stumped. I thought I had this perfect opening line that I couldn't let go of, so I resisted addressing her question. I looked and saw  the "1" indicating page 1 at the bottom right of the first page. I moved the page number to the center of the page and increased the font so my advisor could see it better. I worked on the other parts of her feedback and turned it in again. Her question about the beginning persisted. She gave me more reasons why she felt that my beginning wasn't really the start of the character's story. I didn't get that sometimes the story starts at a different place than page one. In order not to fail out of graduate school within the first two months, I tried something I had never done before. I added to the beginning of my story as I reworked the end.

It felt completely uncomfortable for me, especially because by this time, I knew where and how I wanted my story to end - or so I thought. That was until my advisor challenged me to turn my short story into a novel. She loved the character, saw potential in the plot, and wanted me try something out of my comfort zone. Being the pleaser that I am, I told her that of course I would try it. I hoped it would distract her from questioning the start of the story. Boy, was I wrong about that. As the story unfolded into a longer one, she was more convinced than ever that I needed to start my story at a different point.

What ended up happening was that I wrote a novel from the middle out. I wrote scenes and fit them in where they made sense. I trudged along towards the ending, while getting to know my characters and better understanding what drove her, which added to the beginning of the story. I created obstacles and raised the stakes in the middle.

Making these changes helped me understand that the story had to start at a point where all those elements of the story would begin to matter to the reader. There had to be more than a compelling opening line that I thought was the perfect "hook" to make readers curious enough to read on. I had to expect and deliver more substance in the beginning so readers were eager to get to the heart of the story.

Writing in this Macro Planner style turned out to be more fun than I had imagined. It freed me to think about all parts of my story, to fantasize about what could be. I didn't feel tied to getting to the end in a linear way. Instead I created and deleted characters, I put my MC in situations that were borderline ridiculous but taught me about her resolve. I learned how to see the world I was creating through her eyes. It was a total deviation from how I always thought stories should be written, and I was surprised that a Type A personality like myself could write in that piecemeal sort of way. 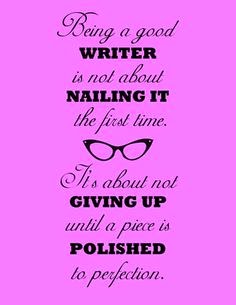 There is no wrong or right way to write a story. Some writers like Smith, are staunchly one type of writer. It works for her. It is part of her process to go from point A to B until she gets to Z. I understand and still use that method on occasion. But, it excites me to know that if I think of a kick-ass scene I can spill it to paper and decide where it fits later. I can play with it the way my advisor always believed I could, even though the thought freaked me out at first.

Now I know that the beginning of my story isn't necessarily the first line. I have to start the story somewhere, but that doesn't mean I can't change it as the plot develops, and that's OK. The important thing is that I know this about myself as a writer and can cater to it. It allows me to offer myself creative freedoms when needed, and make the story the best it can be, the best it deserves to be.

Posted by C.Fernandez-Morrow at 5:00 AM