I've always wanted to see the world. As a child I didn't get to travel many places so it became a goal to see at least one place per continent. Finding a life partner with the same interest in traveling was an amazing feeling. Warren and I would often look at maps of the world and talk about what we'd do, see and eat in various cities. We planned trips together and sometimes apart to places like Panama, New Zealand, Spain and Dubai. Little was more exciting than when we planned a trip to a place we both wanted to visit, like the time we went to South Africa. It was beyond a doubt one of the best times in our lives. Yet, we almost didn't go.

Like many so often do, we thought about going, then backed out because we thought it would be too expensive and we didn't want to put that much on credit cards. It was too far away to leave our daughter behind. We thought that maybe we should put it off for when we were older, more financially secure, could take her with us, etc. But, it was the World Cup and Warren's love of soccer won out. We put ourselves on a strict budget, set up a payment plan for getting the credit cards paid off before the interest killed us, and secured child care. Thank God we took that risk. Some of the brightest and biggest smiles I ever saw on Warren's face were on that trip. Had we waited, we would never have shared that experience. Every time I pass by the framed photo of Warren on the field in Johannesburg, I am grateful that we decided to do it. In the end, not only was it one of the highlights of our marriage, but we were able to do so without going into lasting debt, and learned a lot about saving and planning in the process.

Fast forward two years. My desire to travel didn't die with Warren, but it felt as though my ability to do so did. I am living on a single income, raising my kid on my own, doubting myself every step of the way. How can I think of seeing another part of the world when it takes so much of me to keep this one going round? Warren and I had a plan to travel internationally every other year. We were due for a trip the year he died. While I went to Mexico to spread his ashes, it wasn't the international trip we had envisioned. We were supposed to go to China. Then, in 2014 we were off to Brazil to celebrate another World Cup and renew our vows for our ten-year wedding anniversary. Obviously, none of those came to pass. Instead, I grew angry that something that had been so important to me for so long seemed so far out of the realm of possibility. For so many reasons, international travel seemed like a part of my past, something else I'd lost. 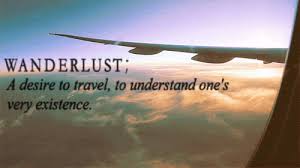 Wanderlust is like an incurable disease. It gnaws at you constantly. For me, experiencing other cultures and stepping out of my comfort zone is like a drug. The more I do it, the more I want to. That feeling that life is fleeting, and there is so much of the world to see is building inside me. It's stronger now than it was before because there's a sense of urgency that I didn't feel when Warren was alive. I decided a few months ago that I was not going to give up traveling just because I had become a widow.

Traveling as a single is different than traveling with a partner. It took some adjusting to see how it could work, but in March, I booked my first solo international trip. In my situation, the best option was to choose a place where I knew someone I could stay with. That limited my destinations, but that didn't bother me.  It would be a good way to ease into solo traveling.

I'm excited and nervous for this new adventure. At the same time, I am careful to manage expectations. It won't be the way it was when Warren was at my side. He and I had a sort of push and pull when it came to travel. We'd both have agendas that we wanted to meet, exposing each other to things the other wouldn't have done on their own. It gave me courage to do them with him at my side, and his excitement often spilled over onto me, and vice versa. But on the bright side, I am visiting a friend, so I'll still have a sidekick for most of the trip.

On Friday I will say good-bye to the western hemisphere and go to South Korea. It will be my first time visiting Asia and hopefully not my last. A friend I've known for about ten years lives there and will be my guide. She's fun and adventurous, and I have no doubt it will be amazing. I am a fan of all things Asian when it comes to food, so I am allowing myself to gain 5 pounds, but am hoping that we'll do so much sight-seeing that it won't happen.

Until Friday I am spending my time much like I did when Warren and I would travel together - worrying about all that has to be done before leaving, and making sure all ducks are in a row before I board that plane. What is different is that I am especially looking forward to the solace of being on an airplane for thirteen hours where I don't have to answer to anyone, and will be completely unplugged from the world. That in itself sounds like a great start to my vacation.
Posted by C.Fernandez-Morrow at 6:00 AM