Sad For What Language Can Do

I've written about the power of words before. As a writer, I believe that words can be more powerful than a sword. That might have been a quote of some dead poet, and if so, I apologize for not citing him or her. Words can hurt in ways more lasting than physical wounds. They can shape a person's self esteem indefinitely. The potency of words have moved nations to war. That's a scary thought. 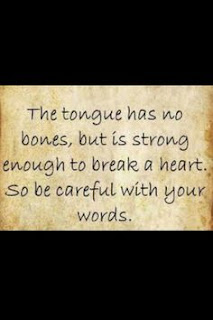 Words flood my head all day, but it's other people's words that have me on edge right now. In particular, I am pondering the affects of presidential candidate Donald Trump's words. I am asking myself how they contribute to an already stormy racial climate. According to dictionary.com, hate speech is defined as:

Speech that attacks, threatens, or insults a person or group on the basis of national origin, ethnicity, color, religion, gender, gender identity, sexual orientation, or disability.

So often, that definition comes to mind when I read about Trump's words to the public. He calls Mexicans rapists and thieves. Not citing examples of actual criminals, but blankets that on the entire Mexican population. When an entire group of people is lumped together as something to be feared, as less than civilized, it is easy to make them targets, blame them for the woes upon the country, and in the end, believe them to be less human than you. It creates an "us" vs. "them" mentality. When mobs of people accept this as truth, it gives them license to treat them as such. This is nothing new. It is the keystone of the Holocaust and the genocide that plagues entire nations even to this day.

Often the United States paints itself as the modern example of a melting pot in which all who live here have the opportunity to thrive and be happy. The Statue of Liberty has come to symbolize this freedom and is seen the world over as what we stand for. Yet, when you examine us under a microscope, you find tears in the fabric of that image. For those of us who call this nation home, we know it is struggling to be that welcoming place that tells the world to:

Give me your tired, your poor, your huddled masses yearning to breathe free, the wretched refuse of your teeming shore. Send these, the homeless, tempest-tossed to me, I lift my lamp beside the golden door!

The sign on Lady Liberty should come with a caveat, an asterisks that clarifies that the United States only wants you to come to these shores if you can prove you are of value. This does not include people of color who don't speak English accent-free; who come from places fraught with war and tyranny; who feed their children dirt pies to stave off hunger; who have watched their families dwindle away from violence and famine. If you believe the hate speech Trump spews, these people are not of value to this country. Never mind that immigrants have contributed billions in ideas and revenues for generations. It doesn't take into account the millions who silently slave away in extreme conditions to make sure we can buy lettuce at less than a dollar a head, and stay in clean hotel rooms with beautifully manicured lawns. That mentality belittles the struggles our global neighbors face in countries where American foreign policies and greed have raped the resources and created a machine that cranks out chronic destitution.

When I think about the ails of the world, it is exhausting and desperate. I have to stop myself from dwelling on it for fear that I will grow too angry to make appropriate decisions, too upset to be at my best. But the sad reality is that I don't have to think about far off places to feel this way. I can think about my own back yard. The affects of Trump's words were felt at my Alma Mater on September 12, 2015 when Trump was scheduled to speak to fellow Republicans. Students prepared for his arrival with a peaceful protest meant to bring attention to how his campaign messages were directly hurting them. They made signs with cardboard and markers, and stood outside in the sun for hours holding them up, as is their right to do. Thousands filled Jack Trice Stadium to cheer for their favorite Iowa football team, fueled on adrenaline, too much beer, and the excitement that comes when rivals take to the grid iron. It started as a small group, and as tailgaters and fans saw what they were doing, some joined in solidarity. They made their own signs that reflected their beliefs. Everyone stood tall and peacefully held their signs, declaring their stand against bigotry.

To be expected, not everyone agreed with them. That is perfectly acceptable. What is not acceptable are the actions of those who disagreed. Trump supporters threw bottle caps and other items at the protesters. They called them names and told them to get the insert expletive here out of their country. One woman even grabbed an organizer's face and told her that she didn't belong here, even though that student is a US citizen. Their displays of intolerance and disrespect was not met with the same. The students continued to hold signs and did not react to the disgusting chants of "White Power" and racial slurs. For that, I am proud of my fellow ISU peers. They stood with dignity and integrity when they could easily have matched the negativity around them, sparking an incident or riot that would have ruined the festivities for all.

The fact that they had to deal with those reactions brings me back to my thoughts about how words can have lasting and powerful affects. People at the game reacted to the impression of immigrants that they had been told. I am venturing a guess that none of those Trump supporters had actually experienced an immigrant rapist or thief. They most likely interact with immigrants on a regular basis, but don't know it. I'm positive each of them has benefited from immigrants because you'd be hard-pressed to find an American who has not enjoyed a meal at a restaurant, or eaten a cut of meat that didn't come from the hands of an immigrant.

Because of hate speech like Trump's, people are spurred to actions that are deplorable and senseless. At Iowa State a young women ripped a sign that held a Martin Luther King, Jr quote, and then turned and giggled as though her impudence was cute, or humorous. It was caught on video and I hope her notoriety for her ignorant actions make her understand that nothing positive comes from lashing out at someone who is not hurting you.

The ignorance in Ames was mild in comparison to what happened in Boston, when two white men beat a Latino man and claimed they did it because they buy into Trump's hate speech. What was sickening was that Trump's reaction praised them as "passionate supporters". This reminds me of a certain dictator who offered accolades to those who helped him hunt, torture and persecute Jews, Gypsies, and other non-Aryan peoples of Europe in the 1930's and 40's. He was a compelling speaker who brilliantly painted entire peoples as undesirable, comparing them to vermin, making it easy for his supporters to target them for atrocities because they no longer deemed them as human. It is not different than what Trump is doing. He is using immigrants as scapegoats and it is translating to putting all Latinos in that category, regardless of citizenship. It puts us in harm's way every time he uses villainous terms to describe us. It inspires fear that gives the masses an excuse to perform heinous actions against us. People of color are already vulnerable in a country that uses law enforcement as a means to incarcerate and kill us. Now we have to worry about over-zealous Trump supporters, too.

I suppose it comes with the territory that words have the capacity to breed hate, just as easily as they can inspire love. They can move the public to take up signs in solidarity, and rip them in a show of odious fanaticism. These are all sad truths that one cannot escape, especially someone like me who loves words and appreciates all they can do. I hope and pray that those of us who have the privilege of voice in this country will use our words to condemn those who use them to hurt and stigmatize others. May we all have the courage and grace of the student protesters who did not greet assault with violence, but stood bravely, taped their words back together, and held them up once more to make their point.

Posted by C.Fernandez-Morrow at 5:40 AM