Widowhood is for life

A fellow widow blogged about how widowhood doesn't go away and referenced an article in her blog that touched a nerve with me.

I recall the day it dawned on me that I had a new title. I was sitting on the floor of my room, talking to one my closest friends. It was a few days after Warren's funeral. I asked her, "So, am I considered single now? Is that what I check on forms from now on? I don't feel single."

She might as well have told me that I had just sprouted a new head because it felt like I was hit with a new identity. This word that I had never thought much about, was now going to be an adjective to describe me. I didn't respond because I didn't know what to say. I had been single and knew what that felt like. I had been married and knew that feeling as well. This was such a different label that it dumbfounded me.

Widows were old. I was 31. Widows had grown children and grandchildren. I had a seven year-old. Widows hung out with other widows and reminisced about the 40+ years they got with their beloved. I only had seven years of marriage and hadn't met any widow younger than 60.

I didn't want that title. But, I wasn't single. That would imply a break-up, or perhaps a decision to part ways. Neither applied. I wasn't married, although I felt as much his partner as I had when he was at my side. So, I felt like I had no other choice but to accept this new entity. I was a widow. I am a widow. I will always be a widow.

In some societies we are pariahs, forgotten by in-laws, scorned by the rest of the community, seen as bad luck and suspect. Historically we have been cast out of our homes, forced to become another man's property, stripped of our possessions, children and human rights. I am beyond lucky that I don't live in those times or places. That's not to say I haven't felt like I carry a bad omen simply by being a widow. I've lost friends who couldn't bear the thought of their own mortality, and therefore see me as a harsh reminder that we live on borrowed time. I have been asked some harsh and incredibly personal questions that no one would have dared ask when Warren was alive. I get strange looks from older people when I use it to describe myself. It is usually followed by a look of disbelief, which is OK, or pity, which I despise. I have found myself reluctant to use it when I don't have the energy to decipher what kind of reaction I'll get from the audience.

But, there's no way around it. I am a widow. It's part of my story. It has made me a different person. It will continue to be part of what shapes me. I accept that, but I am not defined by it. I am comfortable with being a widow because I know I am more than that. But, no matter what else I am, who I become, I am never not going to be Warren's widow.

One Fit Widow said it best:

I don’t ever stop missing him or thinking about him.
People are not replaceable. One person does not replace another. One love is not like another love. They are different. Love is unique.

Even as I love again, or re-marry, I will always miss and love Warren. That will not be replaced by anyone. There will still be times when he is the only person in the world I want to talk to; days I will celebrate him; moments I will long for him; events that will make that anger rise up again and choke me in the way that only grieving can do. This will be my reality no matter who else is in my life, because it is the life of a widow.

I've learned a lot about how enduring love is. Also about how progressive it can be. It is ever-changing. The way I love Warren today is not how I loved him in life. The place he holds in my heart now isn't the same as it was before he died. The person who loves me next will not love me the way he did. I am OK with that. It excites me to know that all love is different because I look forward to loving with all I have learned about love. 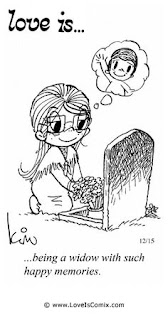 Widowhood has taught me not to take love for granted. I notice it in ways that are subtle. I am kinder in my approach to love. I am more cautious, and for the life of me can't shake the thought of how fleeting it is. I know what it's like to feel like someone's world one minute, and like no one's second thought the next, and I know that's what love can do. I am careful about how I accept love, too. Mediocre won't do. I knew true love. That is all I will allow. I am not ashamed of this. Widowhood has shown me the reason it hurts so much to wear that title is because I was loved so well as a wife.

While I don't go around announcing to strangers that I am a widow, I have grown accustomed to finding ways to reveal it in due time. I imagine that even if I become a wife again some day, I will still want to reveal that I am Warren's widow. It means that I loved him until death did us part, just as I said I would, and that his love is still a part of me. It's not something to be embarrassed about, or want to cover up. It's been one of my greatest and toughest teachers and no matter what other titles I wear, it will be one carried closest to my heart.

I leave you with words from Carole Brody Fleet, author of Widows Wear Stilettos:


Remember that you can and should bring along and integrate the memories and the beauty of your previous life with your beloved into your new life now. Your heart will expand infinitely to accept new love into your life; without limitation and regardless of what that "new love" looks like.
In other words, whether you have fallen in love with:
A new home;
A new career;
A new hobby or pastime;
A new person;
A new direction in life;
A new “you”;
Some of the above;
…or all of the above and then some…
Do not let anyone make you feel guilty about it - including YOU.
You are not dishonoring or disrespecting the memory of your beloved or the life that you built and lived together. You are simply embracing the fact - and the reality - that by being here, you deserve everything that life has to offer you and whatever it is that you seek…
…and that includes your happiness and your peace.

Posted by C.Fernandez-Morrow at 5:30 AM