First Baby I Ever Loved

I fell in love with a baby some time in 1984. That's the year my little brother was born. It didn't happen instantly, wasn't love at first sight. In fact, for the first few months of his life, I think I hated him. There is a family rumor (more like a tall tale if you ask me) that I dumped him outside in the middle of January because he wouldn't stop crying and disturbing me. I plead the fifth on that. But, I do remember staring at him in amazement that he was my brother. I had been an only child for five years and didn't think my situation would ever change. As his colic worsened, I also remember wishing it hadn't.

In all seriousness, one of my first memories of my brother is feeding him a bottle when he was just a few days old, looking down at his tiny fingers and thinking that I needed to protect this fragile being from all the bullies in life. I felt a profound feeling of protectiveness and authority over him, a responsibility like nothing I had ever felt.

As he's aged I haven't lost those feelings entirely, but it's definitely relaxed more. For starters, he's physically bigger than me so he can fight off the bullies on his own. Secondly, he has become a father and is in charge of other young lives. He is a great dad and I don't say that because I'm biased. He is a hands-on dad. He puts his kids before himself, has a firm hand and high expectations, yet a soft heart that dispenses love and affection for them. He wasn't hesitant to change diapers or bathe my nephew and niece as newborns. He stood by his wife's side as she pushed them out, and stepped up again when she left for military training, becoming a single dad while she pursued her dream to serve her country. 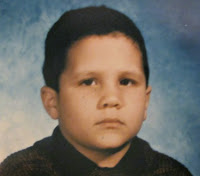 Like all siblings, we fought, we teased, we made each other cry. But in the end, I know he has my back and I have his. As the middle child he probably felt lost or neglected, but as my first sibling, he always had a special place in my heart.

When I left home for college, I worried about him. He would call me all the time, to the point that my parents started forbidding him to call more than once a week because he was racking up the long distance bill. He'd call and whisper and I knew he was calling on the sly, thinking my parents wouldn't find out that he missed me too much to wait for his once a week phone call.

He came to visit me at Iowa State and I was super excited to show him and his friends what college was like, hoping to inspire them to follow in my footsteps. When he moved to Iowa I was relieved that he was out of our neighborhood. So many young Latino men did not make it out of there alive. I was constantly scared that he'd catch a stray bullet for being at the wrong place at the wrong time, or get mixed up with a bad crowd and end up in deep trouble that he couldn't get out of. He moved in with me, then later with Warren and lived it up as part of a bachelor pad where he was the youngest, and became everyone's little brother.

All these years later he has made a home in Des Moines, and I have been fortunate enough to be there with him as he grew into a man, husband, uncle and father. It's hard to believe that the little baby I thought to be the cutest baby in the world now has kids who are cuter than he was. Lucky for me, I get to share stories with them of how their dad was the family baby cry, and remind him in front of them that no matter my height, I'm still the big sister.

Happy Birthday Luis. I love you and have (mostly) enjoyed sharing life and DNA with you. I wish you many decades of happiness and love.
Posted by C.Fernandez-Morrow at 6:32 AM