The Define American Film Festival came to Des Moines January 21-23 and showed a variety of films that focus on the "American" experience of those who come from other countries, both documented and not, and those who identify outside of the global perception of "American". There was a panel discussion after each film where audience members got to ask questions. Many of them spoke from places of understanding, and it was sad yet inspiring to hear how many were advocates, even in the face of dire consequences, like deportation.

I wish I had been able to make it to all the films, but I'm glad I made it to the three that I did.

I am not a huge movie or television person. I can't sit still for long without getting bored, but these films captured my mind in a way that kept me focused and glad I had taken the time to view them.

The first film was A Better Life, starring Demián Bichir as an undocumented father of a teen son in East LA who works as a landscaper and lives in a one bedroom house where he sleeps on the couch so his son can have the only room. His son is first-generation born in the US and doesn't understand how hard his dad works to provide the meager existence they share. It was released in 2011 and got an Oscar nomination. The director, Chris Weitz, who is part Latino from immigrant ancestors, joined Demián Bichir and a local DREAMer and activist, Monica Reyes to answer questions, and share why this film was so important to them. Each of them saw a part of themselves in the story. The panel was moderated by Rekha Basu, a local columnist with the Des Moines Register.


What I liked best about the film festival was that it focused on topics that many often feel afraid to talk about, or have such strong feelings that it can get uncomfortable very quickly. This festival offered a safe place to share, learn and listen to those who were brave enough to share their stories. 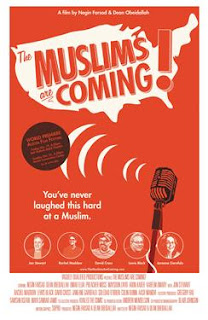 The second film I saw was The Muslims are Coming, a documentary put together by Muslim comedians. Aside from being very funny, it was eye-opening. There was a part where they asked people what the most hated groups in America were and most people listed Muslims among the top, more so than the runners up: immigrants, Jews and gays. It's sad that media has played such a role in creating this fear of a religion in a country that was founded on religious freedoms. How easily we forget that some of the most heinous acts of terrorism and hate in the US were committed by American citizens who do not practice Islam. Politicians use them as scapegoats and to conjure up fear and division, to win votes, and not caring that they are stigmatizing so many who have nothing to do with the violence of a minority of extremists. Have we forgotten the atrocities Christians have committed over centuries? Isn't what police officers are doing to unarmed blacks and Latinos a form of terrorism? Why are they not thought of in the same light? The answer is simple: not all police officers are bad. So why don't Muslims get the same benefit of the doubt?

The film festival was brought to Des Moines by Jose Antonio Vargas, a Pulitzer prize winning journalist and film maker who made history when he published his 'coming out' story as an undocumented immigrant in the New York Times Magazine. He wrote and directed the documentary Undocumented, that was shown at the film festival. It chronicled his story and his search for understanding of why the US immigration system makes it nearly impossible for people like him and his mother to be in the country legally. As with all the films I saw, I highly recommend taking the time to watch it.

As a Puerto Rican, I was born a US citizen with the privilege of never having to worry about myself or my family being ripped apart by broken immigration laws. That privilege went unnoticed for years, until I started learning about other's struggles to live in the shadow of deportation and the fear that comes with being an undocumented American. I deliberately chose that description because I believe that immigrants are sometimes more American than I am. They gave up EVERYTHING to be here. They left all they knew for a place made of dreams and hope. They got here and worked jobs I wouldn't be able to handle. They make it possible for me to eat produce at a cost I can afford so I can lead a  healthy lifestyle. They pay into taxes and social security for programs my family and I benefit from. They cook and open restaurants I love to eat at. They have taught me things that I would otherwise never thought about learning. They demonstrate values of gratitude that serve as examples and humble me. All I did to become American is be born. I did not choose to become American. I did not sacrifice for it like the 11 million undocumented have.

Labels like "illegal" demonize them as though they are criminals for wanting to live free of the violence and economic instability of their homelands. They are often treated and talked about as something to fear and loathe. It's one of the most embarrassing things about being an American. To think that I come from a land that thinks some human lives matter more than others simply because of where that life came to be, or what papers they carry it sickening. How sad that millions of lives are impacted by this and so many have the power to change things for the better and they do not. I wish I could say I come from a country of compassion for all. That is is the American I want to be known for.

Posted by C.Fernandez-Morrow at 6:07 AM