Honesty is always the best policy, but sometimes it doesn't help parents. This was most true for me during the pre-school years. It's a time of endless questions that come at the most inopportune times, like when you're in the middle of a million things. That wasn't when my mind was in the place to answer questions like "Why am I not blonde?" and, "Can we get a pet kangaroo?" Sometimes the questions were less complex, like, "Why can't I have hot Cheetos for breakfast?" But, the pace and quantity felt relentless so I came up with a few ways to buy myself some sanity. I look back now and think that my kid will probably write a NY Times best-seller titled Absurdities I Believed, Thanks to My Mom the Liar. I'll share a few gems in case they can be of help to other parents.

Question: Can we go to Chuck E Cheese?
Answer: Chuck E Cheese is by invitation-only.
For a good two years I saved myself from spending time and money in this cesspool of germs and bad food by asking her if I could see her invitation. She had been there for parties, so she had experienced the place via invitation, so it made sense to her. It saved me from having to answer that question every time we drove by, heard a commercial, or saw an ad. One day my sister took her there on a whim, and my cover was blown. How did I recover? It went something like this:
Her: Mom, Titi took me to Chuck E Cheese. She didn't have an invitation, but they let us in. You don't need an invitation to get in anymore.
Me: Interesting. I didn't know that rule had changed. When I was your age, it was only by invitation.
Lucky for me, by the time this happened, she had outgrown most of their activities.

Question: Can I put glitter on this?
Answer: I'm allergic. If I touch glitter I will get all itchy and blow up like a house. 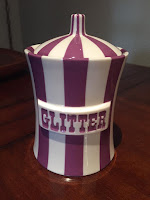 Before you label me a fun-hating mommy, can you recall the last time you had to clean up glitter? Was it a good time? Did you find glitter for weeks after? Did you have glitter in your hair, on your face and in places that shouldn't shimmer? Feel free to use this one. It served me well for projects where alternatives like rhinestones and beads were easier to clean, and saved me money when she'd want glittery shirts that were way over-priced and left half their sparkly design in my washer and dryer.

Question: Why do some people have babies and some don't?
This question gave me pause. I wasn't sure if she was asking me how babies came to be, and she was five, so that question seemed premature. Then I remembered something I learned in a parenting class about kids her age asking exactly what they mean. I realized that she wasn't asking about the birds and the bees, but rather why she saw some women with babies, but not all.
Answer: Because having a baby is a choice. If you don't want one, you don't have to have one. If you want one, sometimes you have to wait for the right time.
I had already gotten flack from people for saying that I did not want to bare children and I knew the stigma attached. I wanted her to know from an early age that child-bearing did not define her as a woman. Also, I wanted to be sensitive to situations of infertility, adoption and the multitude of ways families come to be. That conversation came back many times in various forms. In one, she asked me how a woman can choose not to have a baby. It led to a conversation about birth control and family planning, that ended with her understanding that she could one day take a "vitamin" that would stop a baby from growing inside her until she was ready. She went on to ask my friend if her dog took the special vitamin so she wouldn't have puppies, and I knew she understood the concept. It has since made it easier to talk about changing bodies, protection from pregnancy and STDs and other topics that most parents cringe thinking about.

This one came a few years after pre-school:
Question: Is Santa real?
Answer: He is for those who believe, but mostly up to age 10. After that, it's up to the parents to create Christmas for their older kids, and adults to do so for each other.
It surprised me how easily that was accepted. She shook her head, and said that made sense because someone at her school had told her that Santa wasn't real, but that kid was a bigger kid, so Santa was no longer real to him. What was more surprising was that she was not yet ten, and seemed relieved to know that she still had a few years of Santa left. When she turned ten she asked if she could help choose gifts for the adults in the family. Once she realized that Santa was never real, she took it in stride and we started new traditions of giving in place of long lists of what she wanted.

By all means, I am not advocating lying to kids, but sometimes a parent needs a quick out, so I offer you some of mine, and hope they serve you as well as they did me. Here are some others that bring me solace knowing I'm not the only parent out there who needs to get creative in order to keep their sanity.

Note: No young minds were tarnished for eternity in the making of this post.

Posted by C.Fernandez-Morrow at 6:13 AM