A Festival that is Part of History

One of the accomplishments I am extremely proud of is being a founder of Iowa's Latino Heritage Festival.

Back in 2001, when I first moved to Des Moines, I was invited to join a group of volunteers who wanted to have a festival to celebrate Latino culture in Iowa. I wanted to get involved with the community and I liked the idea, so I signed on. Warren was one of the volunteers and over the course of planning the first Iowa Latino Heritage Festival he and I got to know each other pretty well and spent lots of time together working on the various details.

We were an impressive cross-section of young professionals and established community leaders who put countless hours into finding a way to celebrate the various Latino cultures represented across the state. None of us had done anything like that before. We were learning as we went, and becoming friends in the process. To this day I have dear friends I met through the festival.

The first festival was scheduled to take place Saturday, Sept. 15, 2001. We had the permits in place for closing off streets. Tent vendors had paid deposits, a full day of entertainment had been mapped out, food vendors had committed to selling tacos, pupusas, arepas and other Latin American delicacies. Then September 11th happened. We were as stunned as everyone else. There was no way were going to have a celebration in the midst of mourning. We postponed the festival to the following spring.

In the meantime, Iowa became a tense place to live for people of olive skin and accents. The English-only laws were being challenged by the growing Latino community and it seldom felt comfortable or safe to speak Spanish in public. There was a bomb scare at the local Jewish school where a friend of mine had a daughter. I got suspicious looks when I was out and about. As a Peruvian friend and I walked down the street, a white guy in a pick-up truck yelled out, TERRORISTS and threw a Coke bottle at us. I seriously began second-guessing my choice to live here.

Since all the deposits we had made for the festival were non-refundable, we had to start fund-raising again. It took over six months to launch the first Latino Festival in Iowa. It was a beautiful spring day, perfectly clear skies and warm enough that everyone wanted to be outdoors after a cold winter. Having never put on an event of this magnitude, we didn't know what to expect in terms of attendance. We told vendors to plan for three to five-thousand people. We were seriously underestimating this community's desire to celebrate. 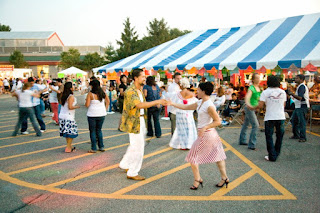 Roughly ten-thousand people came to that first festival. Food vendors that also had restaurants called their employees and told them to close the restaurant and come help with the festival. They made runs to buy more supplies. Buses from rural communities came packed to the brim with Latinos who organized through their churches to get to and from the festival. It was amazing to see that unfold. 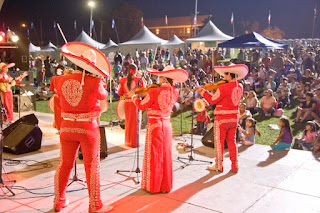 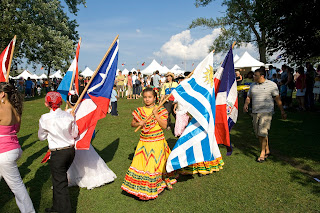 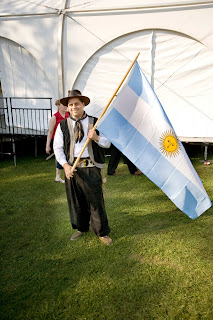 The most impacting memory I have of the day is walking around with my festival volunteer t-shirt, and someone grabbed my arm. It was an elderly Latina with tears in her eyes. In Spanish, she asked me, "Did you help do this?" "Yes," I told her. She closed her eyes and squeezed my arm and thanked me. She pointed at a Latino teen a few feet away wearing a shirt with the flag of the Dominican Republic and he was laughing and talking with another teen. She said, "That's my grandson. He has refused to speak Spanish to me, or anyone else since the bombing. But look at him now, speaking our language and wearing his flag with pride, at peace." I was floored, moved  beyond words at what this moment meant to this older lady, who had probably been through so much to be in this country, to see her grandchildren have more than she could offer her own children. She hugged me and thanked me again. To this day, that moment is clear as day in my mind and makes me smile when I recall it.

At the end of the day, I was so exhausted that I fell asleep in the bathtub, but I was also so content and proud of what we had done. We didn't set out to change the cultural landscape of the city, or the state, but in putting our hearts and talents to work in ways that challenged us, for the good of our community as a whole, we did just that. Today this festival is the largest cultural festival in the state. It has expanded to a two-day celebration and draws nearly thirty-thousand people. I served on the board and volunteered for ten years. Since Warren's passing I have had to diminish my role to running a cultural booth to showcase Puerto Rican culture, but I still look forward to it every year, and walk around and feel that same pride and sense of purpose I did at the first festival, knowing that I was part of making history.

Posted by C.Fernandez-Morrow at 6:14 AM