For Me, Not Him 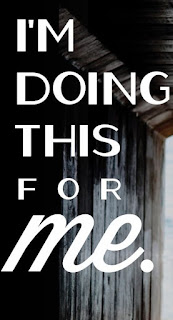 I've blogged about my attention to healthy living before, and gotten positive, motivating responses. But, there have been less than positive responses, too and up until an incident this weekend, I hadn't realized how much I had internalized it.

When I began working out and wanting to get fit, it had absolutely everything to do with becoming stronger. I felt weak from the inside, and the outside showed it. Some would say it's a natural reaction to shock, and it's common with PTSD. Either way, I was out of shape and sick of feeling fragile. Working out changed that for me. As my body grew stronger, so did my emotional state. I began to see the world as a place I could take on, not a place that had taken my heart and soul. It brought me to life as much as writing did. It still does, and because of that I value my workout time as much as my writing time. I feel strongest and most powerful when I am lifting weights, pushing through miles of running, or pounding out a heavy bag.

As the results started to show on my body, I received compliments. However, a strong dose of those compliments came with a modifier - the implication that I was doing it to find a man.

I am not naive. I understand that widows have a stigma, especially among non-widowed women. We are seen as desperate to find a replacement, by any means necessary, a threat to their marriages and unions. I recall the comments about how great I look, and that of course I want to look good now. I got the message loud and clear. What went unsaid was that now that I was single, I was looking for another husband. That is a common misconception about widows and widowers, that we are always hunting to replace what we lost. In all my widow support groups and events attended in relation to widowhood, I have yet to find this widow. But, I know she exists in the minds of those who have never walked that path.

The comments did not deflect from my desire to be fit and live a healthy life, but I certainly have allowed it to affect how I carry myself. I am particularly careful around the husbands and boyfriends of my friends, even close friends. The fear that something might be misunderstood as a come-on or an attraction terrifies me. I watch what I say, how I dress, what I do. I am a guarded version of myself. I keep my distance, and generally feel less than comfortable in those situations. Before becoming a widow, I didn't think twice about being myself around anyone. It is a sad realization because in most cases, I don't care what people think of me. I never thought of myself as the kind of person who changed who she was because of what others may think. I live a transparent life and those who know me best also know that about me. This blog is a testament to that. However, I recently felt the shame and judgement and it brought back those times when I doubted how I looked because I falsely bought into the hype that a widow should be more modest than most women; widows do not spend time alone with men who are spoken for; widows should not be desirable; widows shouldn't look for love before seven years of losing their spouse. As ludicrous as those statements may sound, I have been told all of them by people I am closest to. So, when someone I am not as close to implies that I take care of my body in order to use it as a man-magnet, I am extra sensitive to it.

I do not want to perpetuate any stereotypes of widows being any more threatening that any other person. I try to stay as far from that as possible in the hopes that someone who might have that false mentality will see my example and conclude that their opinions are inaccurate. They are also inappropriate, hurtful and cut at the character of a woman who is trying to survive, yet facing a new slew of labels that she may know nothing about. After nearly five years of widowhood, I discover different expectations placed on me because of this label. For the most part, I navigate them with confidence and grace, setting a brave exterior. But, every now and then, like this weekend, I get raw reminders that I'm still vulnerable in ways that will take years to overcome.
Posted by C.Fernandez-Morrow at 5:56 AM