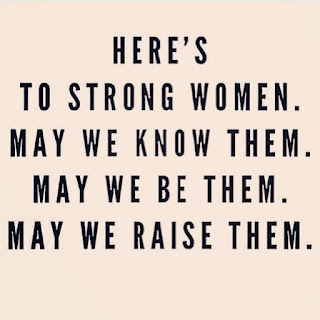 In a weekend of many lows, there was a highlight that will forever stick with me. My daughter and I, along with some fierce friends and thousands of others participated in the Women's March to protest the direction in which our government is going in light of the new administration. Politics aside, sharing the experience with my daughter was powerful. It was empowering and reminded me of when my mother and I walked in our first 5K when I was a little older than my daughter is today.

Let's flash back to the early nineties, circa 1993/4. My aunt was being tested for Multiple Sclerosis. My mother is extremely close to her sisters and felt helpless, scared and sad at this possible diagnosis. At the same time, I was battling my weight and my mom was leading the charge to create a healthier lifestyle for the entire family. I don't know where it came from, but she got a brochure for a 5K for the Multiple Sclerosis Society and said we should do it together. It was a nice blend of being active and helping a cause that was quickly becoming near and dear to our hearts.

We didn't know a thing about 5Ks, outside of what the brochure said, and we were unfamiliar with how to find the starting line. Somehow, after an hour and a half on city buses, we found it. I can't recall how long it took us to walk the route. What I remember is that I could feel my mother's hope with every step. We had raised a little money as part of our participation that we hoped would help in the search for treatments and cures for MS. The day was sunny, but there was still a bite in the air that is common along the lakefront during early spring in Chicago. We followed the other walkers and runners, and there were some people on the sidelines who cheered us on. It was just my mother and me, and coming from a family of five, that kind of one-on-one time was rare.

At the end of the 5K our completion time didn't matter. We weren't concerned about being exhausted, or that we hadn't run an inch of the route. We had done something in the face of a situation that felt hopeless and where we felt helpless to change it. Did our walking result in a cure? No. Did it change the pain my aunt was facing? Not in the least. But there is a lot to be said for restoring hope and for the shared experience of finding that with someone who needs it as much as you do.

Aside from being part of history and having a voice when many are scared to do so, my daughter and I shared a moment of hope at the Women's March. Even as a twelve-year-old my daughter knows that what is happening within our nation is scary and threatens her future. We have talked about what it might mean to be a woman under this administration, a brown woman at that. It doesn't look pretty. It has caused a lot of anxiety and sadness in me and has made her look at things differently. As we marched, read the signs of those around us, heard the speakers and chanted responses we did not feel hopeless and helpless because we were doing something. We were not letting our fear stop us and she got to witness the thousands who were there in protection of her voice, her rights, and her future. 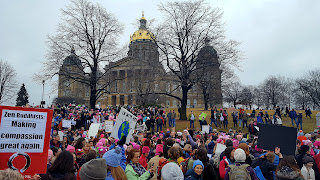 My hope for her is that no matter what lies ahead that she remember that she and her mom got together and did something to bring hope back at a time when it was missing in our lives. We stepped up on a day we were sad, mourning and hurting from our loss to join others in making a statement. We had never seen crowds of that magnitude assemble in Des Moines and it was impactful and powerful. I hope the memory of what she was a part of stays with her so she knows that she is not alone, that there is hope, and that above all else, she and her mother stood up and participated together and created a unique memory together that can't be taken away, no matter the outcome of the day's event. 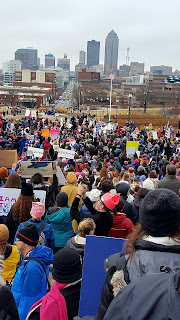 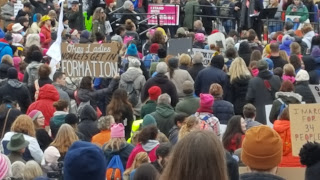 Posted by C.Fernandez-Morrow at 6:45 AM