Why I Keep Doing This

Since Warren died I have been part of a group that brings live Latin music to Des Moines. I have blogged about it before. It's a labor of love for everyone involved. We spend months brainstorming, organizing, and networking. We also meet for hours at each others' houses, coffee shops and other kid-friendly places around town to get all the details just right. We do this aside from raising our kids, running businesses, working full-time jobs, and the other pulls of life. There is no payment involved, it is one-hundred percent voluntary and often we are learning as we go. Before the first concert, none of us had put together a concert. We did the best we could and continue to do so. The reward is that every year we put on an event that Warren would have loved, and we are fulfilled seeing people enjoy themselves - even those who have no idea who Warren was or what he meant to us.

Before the fulfillment comes lots of work and for me, lots and lots of stress. Every year I tell myself it's my last year, that I cannot do it again. It is emotionally draining, even after five years and every event comes with a wave of sadness for Warren missing yet another event that would have brought out that smile I loved so much. Aside from that, the more unfamiliar faces I see at the event, the more it hits me how much has changed since his death and how many people never met him or have any idea what he did to make Des Moines the kind of place that would even be receptive to a Latin music festival that welcomes all ages and celebrates the beauty of Spanish music. 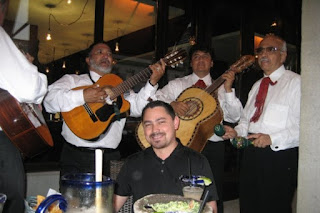 Maybe I'm a glutton for punishment, or more likely, I have grown to love the other side of this event. I love that it has brought me a community of people who are as driven and optimistic as Warren was. Some of the committee members never met Warren, yet are dedicated to the cause. Others don't speak Spanish but love the idea behind the event and share their talents as a passion of their hearts. Volunteers come out to support it because they believe in what we are doing to contribute to the music scene. Their energy is infectious. It comes from a genuine place of wanting to add to the musical landscape of our city. It is hard to walk away from that.

On the other hand, the event has come with personal expenses beyond the emotional ones. Every year I call on everyone I know and practically beg for their support to donate their time, talents, and other resources. I don't like doing that. I much prefer being the one who is giving than the one who is asking. When I've exhausted my networks I reach in my own pool of resources. Aside from the time I commit, I also purchase a lot of the odds and ends needed to run the event. Those add up. It was easier when I was working two jobs but that is no longer my situation. When I gave up my other job I knew it was going to mean that I would have to stop making so many personal purchases for the festival and that was not an easy decision to make. Unfortunately, I was being stretched way too thin and aspects of my life were suffering because of it. I had to make some tough choices.

Something that helped me decide that it was OK to step back from making so many personal gifts to the festival is its potential to grow beyond myself and the committee. Being in Des Moines makes it difficult for those who loved Warren and want to support me from afar to do so and there hasn't been a place for their desire to help. This year I decided to try to make one. For the first time ever I created a GoFundMe account to replace my out of pocket contributions to the festival. I have made contributions on GoFundMe but have never set up a campaign. To be honest, I am nervous about it. I want to meet my goal, but I feel bad reaching out for help. It's probably all in my head, but it's hard not to think that people are tired of hearing about ways I want to honor Warren. After five years it is easy to move forward and want to leave the past behind. For me, that is not possible. Warren may be gone physically but he remains a part of my everyday life. I often live my life through his eyes, wishing he could see what I see and be part of everything like he used to be.

All that to say, I am trying something different, crossing my fingers and wondering what Warren would think about this whole crowdsourcing thing. He'd probably be trigger-happy and give to all the causes that came across his feed. I hope that generosity lives on and that this campaign is successful so the festival can live on. If you would like to help, please give at: https://www.gofundme.com/rock-for-warren.

Posted by C.Fernandez-Morrow at 6:07 AM