Warren and I personified the saying, "Fat and happy." In case you're not familiar with the term, it usually applies to a person who is in love and therefore puts on weight from all the date nights and cuddle time. In our case, it was pretty accurate, even after seven years of marriage. We were an active family, but we spent a lot of time celebrating around food. Plus, we were involved in so many community efforts that eating out was a very common occurrence. In short, while we spent a good chunk of time at the YMCA, we did not eat the best foods on a regular basis.

Fast forward to 2013, a year after Warren's death. I was working out with a trainer and trying to get healthy again. Part of that was changing my eating habits. I did it slowly. First, I cut white bread, pasta, potatoes and white rice from my diet. Over time, this helped me curb my sweet tooth. Once that became easier, I cut out all non-fruit or vegetable carbs after 3 PM. That was difficult. My mom lived with me at the time and would get frustrated that I only ate vegetable omelets, salads, or chicken and beans for dinner every night. I explained to her that I did not want to eat for the sake of eating, I wanted to eat things that would help me meet my goals with my trainer. I was paying too much money for her services to let it be in vain over what I ate. I never called it a diet and still do not.

In my life as a fattie, diets were unsustainable. The only thing that ever worked for me was changing what I ate. I changed the way I thought about food, too. Instead of asking friends to go out for drinks and dinner to spend time together, I suggested a walk around the lake or roller-skating with our kids. If I was going to an event where food was involved I checked out the menu ahead of time and made a plan for what I could eat, and made sure to have a snack before going so I wouldn't be starving and make poor choices. As changes began to feel more natural, I added some and relaxed on others.

After three years, I don't look at it as a stream of changes anymore, it's simply the way I eat. As I became healthier I became more flexible, but most of the things I stopped eating aren't even desirable to me anymore. For example, chocolate was my weakness. I used to have some every day. Warren was a chocolate-lover, too so we always had some in the house. I told my trainer that I would never give up chocolate and she said I shouldn't. However, as I started to cut sugar from my diet, it didn't call to me like it once had. I could be in a room with it and not want it at all. If I did crave it, one or two mouthfuls was all I could stand because it tasted too sweet to me. I switched to dark chocolate and even then it is rare when I feel like having any.

Folks have asked me to share what my meals and snacks are like, so I'll try to shed light and share some of my tips and advice.

Grocery Shopping: I shop the perimeter of the store. It helps me not buy processed and sugar-filled food when I don't see them as I shop. Everything I need on a regular basis is found outside of the center shelves and in the freezer section. Staples I buy weekly or in bulk include: 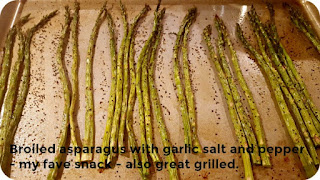 Meal prep: I don't do as much as I used to, but one thing I like to do is boil up to ten eggs at a time, peel them and divide them into containers I keep at work and at home so I always have an easy protein source. I sometimes go through two dozen eggs per week. I eat an omelet at least once a week for dinner and boiled eggs are my go-to snack throughout the day.

I cut and rinse mini peppers, package them in containers and use them to tame my craving for something crunchy. Sometimes I will scoop some cottage cheese in one and sprinkle a dash of cinnamon. Tasty and has calcium and protein.

I cook enough chicken for an army, using a variety of seasonings and I bag and refrigerate them. I don't always have an idea of what to do with all of it, but it helps to have it ready to go when needed.

Meals: I am not very good about breakfast and usually have what I call a piecemeal breakfast. I start
with a container of Greek yogurt with raw almonds mixed in for crunch and added protein. About half an hour later I have a piece of fruit and a cup of skim milk. When I'm in a hurry I have coffee and a protein bar, or I'll put steel-cut oats in a slow cooker the night before and have some with honey and cinnamon. If I have some time, I like to make a spinach/pineapple smoothie. It packs protein and two cups of leafy greens first thing in the morning.

For lunch during the week I have a bowl of soup pretty much every day. I add extra chicken, tofu, boiled eggs, peas or edamame to almost all soups. I usually have that with a piece of fruit, or a cheese stick and water. It's also the meal with which I usually take my vitamins. It's a recent addition that my mom insisted on, so mom, when you read this, I hope you see that I sometimes do listen to you.

Like most working moms, I am often in a time crunch at dinner time. I don't "cook" as much as I "throw together" food to make dinner. For example, I had some grilled chicken breast, avocado pesto, spinach, some veggies and lettuce - Voila!

Other nights, I have to use up salad mix and other veggies before they go bad, so mega-salads are what's for dinner. 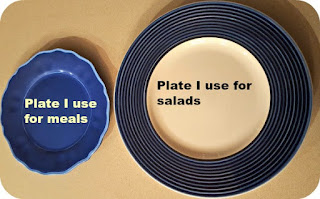 My boyfriend is teaching me how to grill and I love that it's so fast and healthy! We grill as often as we can. We often chop veggies, throw them in some aluminum foil with seasoning or garlic and onions and toss them on the grill. Adding grilled sweet potatoes and mandarin oranges to salads takes the place of dressing and gives it color and texture. Also, when it comes to salads I serve them on regular dinner plates because they're bigger. Otherwise, I serve my meals on salad plates or children's plates to keep the portions in check.

Now that I am at my ideal weight and size, I have incorporated quinoa, whole wheat pasta, sprout bread, and brown rice into my diet, but eat them very sparingly, like maybe once or twice per month. It's not that I think they're bad for me, it's just that I have learned to navigate meals without them. When I have them, I keep portions to half a cup or less. 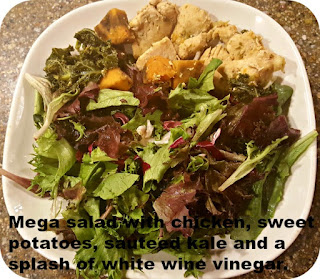 Drinks: On days I work out I drink six to eight cups of water. That means I pee a lot. It also helps keep me full and I've noticed that my skin looks clearer, too. In the mornings I usually start with skim milk. When I go out, I choose unsweetened ice tea and sometimes add some lemonade. I am not big on alcoholic drinks but I do not deprive myself either. At home, I like a glass of wine with dinner once or twice a week, too. It's made from grapes so it counts as a fruit, right?

If someone wants to change their eating habits the best advice I can give is to do it one change at a time until you get used to it. This isn't a race so don't put yourself on a timeline. If it is truly a lifestyle change, it is for life so take your time deciding what works best for you. Also, don't tell yourself that you will never eat something again. The more restrictive you are with yourself, the less satisfied you'll feel with the changes and they won't stick. Besides, deprivation is negative and in order for this to become a lifestyle, you should keep it positive. For example, I love Vietnamese baguettes. They are warm, buttery carb deliciousness sold at the grocery store within walking distance from my house. Even though I stopped eating white bread, I didn't think I would never eat one again. If the occasion to eat one presents itself, I share it with someone, or I cut off a piece and savor it, but don't eat the whole thing. If the whole baguette happens to make its way into my belly, so be it. I don't berate myself or give up. I lick my lips, enjoy the feeling of a belly full of yumminess and tell myself that my next meal will be a little healthier. 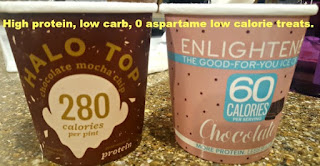 Posted by C.Fernandez-Morrow at 5:59 AM