Last month, my boyfriend and I gave my kitchen a facelift. Aside from the gratification of doing something that was long overdue, it was a new adventure for us as a couple. I was nervous about it. I recalled from the early days of home ownership that working on a house is stressful. That is why I had been avoiding it for so many years. This is hard enough when you are dealing with a marriage and a shared bank account, but how does it work when two people have ideas but ultimately one person shelling out the dough? I weighed that thought for a bit while thinking about the project. The good thing about my relationship is that my boyfriend and I have good communication. I was able to relay this worry to him and we talked about it. Once aired, it wasn't as complicated as I had made it out to be in my head. That helped me put the whole project into perspective. I made some decisions to ensure that the experience would be a positive one for both of us. 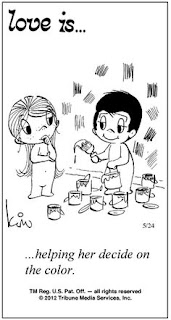 I value my boyfriend's opinion. Trusting him and creating an open dialogue for idea sharing was key. I trusted that he not only wanted the same results I did but that he wanted us to enjoy the process together. It was the first time he was attempting home improvement with a girlfriend and he was excited about what it would add to the relationship. His enthusiasm was contagious and I am glad that I allowed myself to share in that. Not only did it ease the stress of the whole situation, it helped reinforce that there is still a lot to experience together and that thought in itself is exciting. Once I aligned myself with that mentality, it was easier to focus and feel comfortable about what we were taking on. It grew my trust for him in areas that extend well beyond my kitchen.

This project was about more than a kitchen remodel. It was a chance to be creative together. We shared ideas and talked through challenges. I saw how comfortable he is in a space that had been created with another man, and yet I never felt that he was trying to wipe that away. On the contrary, I felt his respect for what had been built. Unbeknownst to him, it helped me feel closer to him. Accepting a person's past is difficult. I struggle with it all the time. Yet, something that I love about my boyfriend is that he has always been supportive and loving when it comes to that. His acceptance created one of the most endearing moments in our relationship during one of our first dates.

He knew I was a widow but didn't know anything about what happened or who I was married to. I had mentioned Warren's name once or twice but was careful about it because I didn't know how it would be received. He said, "I have to tell you something." Right away I thought the worse: "This guy is going to tell me that he's married or has a prison record." I braced myself.

"I Googled your husband."

I was dumbfounded. I didn't expect that at all. The first thing that struck me was that he called him my husband, not my ex-husband as some people had done. For the record, a deceased husband is not an ex-husband. We did not break up. But, I digress.

"I hope I didn't overstep, but you talk about him with so much love and admiration that I wanted to know more about him but didn't want to ask in case that would be too painful or weird for you. I hope you don't feel like I violated your privacy."

I did not. I felt touched in a way I hadn't in a long time. I didn't know what to say, so I asked what he found.

"He seems like he was an amazing guy. I wish I had met him. I would have liked to be his friend. I could have learned a lot from him."

His response was one-hundred percent genuine and honest and it moved me. I saw him in a different light. I felt safe and consoled in his presence and thankfully, these feelings haven't faded in the two years since that conversation.

Since then, he has accompanied me to receptions where I accepted awards in Warren's honor, has been a part of my family's Day of the Dead celebrations of Warren's life, and has been tender and understanding on the tough days like anniversaries and holidays. He has never once made me feel restricted in talking about, missing or acknowledging Warren's place in my life and isn't weirded out by the photos of Warren and I that adorn my home. 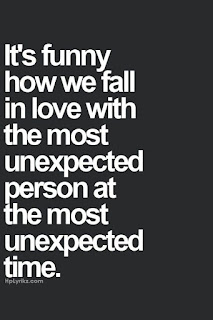 When it came to dating as a widow it was scary terrain. As most things in my life, I didn't set out to find a long-term boyfriend when I met him. I didn't even know if I could be a part of something that involved love. However, I developed feelings that were a force to be reckoned with. Aside from feeling loved and supported again, he makes me laugh on a daily basis. He is wonderful with my daughter and the other little people in my life, as well as with my mom and sister. He has become friends with my brother and I like that they have so much in common.

These positives were on our side when we started transforming the kitchen to make way for a space we would both enjoy. We laughed at our mistakes and worked together on the challenges that slowed us down. But we also got a high from successfully completing various little projects we had never done before. It felt beyond gratifying to share those accomplishments with each other and know that we were rooting for the other's success. In the end, we shared in the pride that came from what we had done together. It helped that he has a great eye for home decor and functionality. His vision helped turn a useless space into a breakfast nook that I love.

Cheers to reinventing a home, while learning how to love in a way that was wildly unexpected and brought with it a kick-ass kitchen. 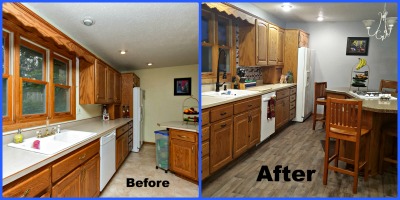 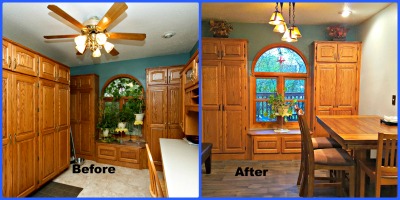 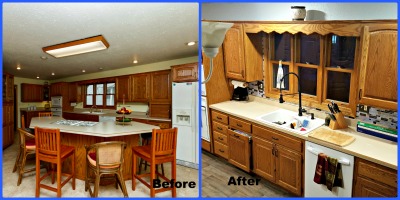 Posted by C.Fernandez-Morrow at 5:56 AM