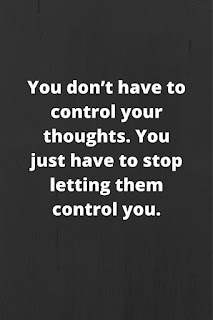 In the time that I've been away from blogging I have been trying to exercise self-love and doing a crappy job of it. For the last few weeks, I have been at war with my own thoughts. This is how my anxiety starts and then manifests itself in a variety of ways.

I was first diagnosed with anxiety when I graduated college but have had it as long as I can remember. All my life I recall physical reactions to events and situations. I would feel sick to my stomach before major events like my sweet sixteen and prom, and in reaction to things like being bullied. Sleeping the night before important events was nearly impossible. I would have epic meltdowns that my mother had no idea how to control and at times didn't know what brought them on. I wish I could say that these tantrums subsided as I matured but instead, they have matured right along with me.

In college, my anxiety took the form of bulimia. As long as there was a toilet nearby, I felt like I could control the constant negative chatter that lived in my head. While the behavior started before college, it wasn't until then that it took on another life, the only way I knew to calm myself. It was about so much more than being thin.

I still remember the meltdown that scared me into action. I was alone in my tiny apartment and it was a few weeks from graduation. I was juggling two jobs, an internship and leading college organizations. To top it all off, I had an unsupportive boyfriend and was trying to save a relationship that couldn't be saved. On the surface, I looked like I had everything under control. When alone, it was another story. I shook with the fear of failure. I ate less than five bites of food per day and never kept any of it down. I cried for hours when I should have been studying or sleeping. I spent hours on cardio machines trying to sweat away the restlessness. The night of my eye-opening meltdown, I burst into tears that rocked my body like I was having a seizure. I fell to the ground and every muscle felt tight. It was like there was a weight on my chest and I couldn't breathe, even as I cried. I couldn't even get up to go to the bathroom and flush my feelings away. I think about that night and get goosebumps recalling the fear that gripped me. No doubt it was due to months of malnourishment, lack of sleep, unhealthy habits and stress. It was also fueled by my propensity to constantly worry about the "WHAT IF."

I am a master at coming up with the worse WHAT IF scenarios in my head and then panicking because I don't feel equipped to face them. WHAT IF has been my companion as long as I can remember and it has never been positive WHAT IFs, it's always been doom and gloom in my head.

That night, when I was finally able to calm down and catch my breath, I knew something wasn't right. It was scary to go through that and I wanted to know what was happening so I could prevent it. I had heard about anxiety attacks and wondered if that was what had just happened.

After I graduated I was on a mission to find out if I had clinical anxiety. I met with a few different therapists and psychiatrists before finding one and she did a series of tests. We had difficult and lengthy conversations. After an extensive evaluation, she prescribed medication. Like many, I was weary to take medication for the rest of my life.  She said it could be a crutch or a tool, it was up to me. I wanted it to be a tool. She said I had to put in a lot of work if I wanted that. She encouraged me that anxiety could be controlled with lifestyle choices, but made it clear that there was no cure. Even with the medication, I would have relapses. There would always be triggers and I would have to learn new coping skills.

Over the years I have gone on and off meds and have tried various combinations. I have learned to identify what helps me get rid of the WHAT IFs, or at least get them to quiet down so I can have more realistic thoughts. My psychiatrist was right, though. It takes constant work to live with anxiety and as I change, so does my condition.

When Warren died, my anxiety around night time and sleep became a more ferocious beast. There were so many nights I would lay in bed and my heart would pound and my mind would race and my stomach would churn for hours. It was common for me to get three hours of sleep per night, usually less. On nights it was really bad, I pulled out my laptop and wrote. Other nights I popped melatonin like it was candy. After about a year of this with little to no success, I saw my doctor and got on meds. The same meds that had worked before no longer worked and I spent months trying various combinations. Fast forward to today, and while I've been off the pills for almost a year, I recognize that they help more than what I can do on my own.

Recently, I have felt some familiar symptoms. Sleep has become difficult again and the faintest sound wakes me up and I am awake for hours. I have bent over a toilet bowl and burst into tears at silly provocations. Over the years I have learned to hold it together during the day but the comfort of home is a different story. My poor daughter and boyfriend have been bearing the brunt of it and it's not fair to them. The worst burden is in my own head. It has become loud again. I continue to workout, read, knit, write, keep busy and be social - all tools that have helped me maintain a life without pills but I am vigilant and aware. I have noticed a shift in how these activities affect me. When this happens, I have learned to reach out and get help. Life is much easier when my brain can rest, which allows the rest of my body to do so as well.

Mental health issues are taboo and I don't understand why. I didn't bring on my anxiety. It is as much a part of me as my curls. It was formed in my DNA. It is also common. I see the signs of it in others and depending on my comfort with the person, I feel proud helping them by sharing my story. My methods may not work for everyone but if it can be helpful knowing that someone else sees you and understands, then I hope these words can do that.

Posted by C.Fernandez-Morrow at 7:24 PM