I ran across a headline today that made me stop and think. It said, ARE YOU THANKFUL FOR YOUR MARRIAGE? While I didn't hesitate in thinking, "YES," I asked myself why. It was good to reflect and see how marriage has played in role in forming me as a woman.

I have heard people say that marriage is just a piece of paper and that it is unnecessary. I have never agreed with that. The right to that piece of paper has been the center of controversy, strife, and heartache for couples who were denied the right to marry. Without the struggles of those who fought against that injustice, my husband may not have existed since interracial couples were not always able to marry legally. In my opinion, that piece of paper is a declaration of a promise that you are a team through life. While anything can symbolize that kind of partnership, I learned that the act of marriage also holds security. That piece of paper allowed me to make decisions after Warren died that I would otherwise be unauthorized to make. It designated me as the person closest to him who would know what his last wishes might be; how he would want his estate managed; and as the beneficiary of his assets. This authority was earned in the countless hours spent supporting him in all he tried. It was more than being the person who cheered him on. We brainstormed together on ideas; I helped him scope talented hires; we networked together to make connections for his career and business; I was at his side shaking hands and smiling at events where he was the honoree, speaker and featured guest; I held down the household while he wheeled and dealed, and put up with the laptop as the third wheel in our marriage. In other words, we were a team in all things. His successes were possible because of me and mine were thanks to him. 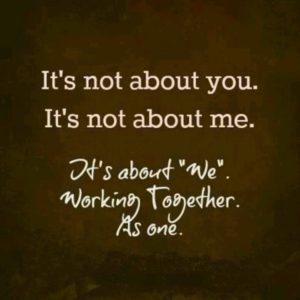 He earned the right to all I accomplished in our marriage. I didn't do it alone and would not have been able to get nearly as far without his steady supply of encouragement and hands-on guidance. Warren knew my goals and dreams so when he came across an opportunity to help make those happen, he attacked it as if it were his own. That level of support and energy at my side was a wonderful example of true partnership and allowed me to develop my passions, see the world and become the woman I am today. Being married taught me about teamwork. Our dreams were intertwined, dependent on the other. Once married we were no longer making choices for ourselves, it was for the well-being of what we were creating. The days of being the center of my own universe were behind me. I learned what it was like to have a teammate in my corner for the good and the bad. On the days things were good we both celebrated. When things weren't good we strategized together to see how to turn things around. There were times when I pushed harder because he expected no less of me. He did the same and strived to make me proud.

Every day we built our life together gave me a reason to be proud because it wasn't easy work. We had different ideas and temperaments. We expressed ourselves uniquely. We spoke different love languages we had to learn and adapt to. There were times when we clicked and times when we didn't. Like any other relationship, it had its highs and lows. When life threw curveballs we dodged them together and when we got lemons we squeezed them together to make lemonade. Living dually like that was like training for the ultimate Olympics with my coach and teammate rolled into one and always at my side.

In the end, my team lost an MVP. Am I thankful for that team? Hell yea. Even though it felt like I could never play that sport again, it didn't dampen my memories of the game or the camaraderie of being on a team. I am grateful that I learned those lessons and can carry them with me. I will forever be grateful that I learned to live an interknit life with someone else. The lesson was short so if I ever marry again I know I will have more to learn but I am grateful for the marriage that showed me I am capable of being an active member of such an important team.
Posted by C.Fernandez-Morrow at 8:03 PM