A few weeks ago I got an email from a local reporter asking if I'd be interested in sharing my story as a widow who had found love again. She had heard about me from someone in the community and wanted to know more about me.


I gave her my story in four points:
She was intrigued and we spoke in more detail for a while. She said several other people had been recommended and that after she heard their stories she would get back to me. I didn't give it much thought and one day I got an email from her saying that I, along with five others, had been selected to be part of the line-up to tell stories related to New Beginnings, the theme for their event. 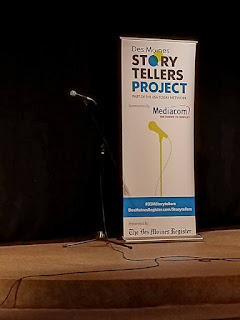 These events had been happening all over the city for at least a year but I had never attended. I didn't really know what to expect but I speak publically all the time so I was excited to get another chance to do so. Then she told me that this would be different. It would have to be a personal story that hadn't been shared before. Also, it wouldn't be a presentation - no podium or slideshow to guide me. I couldn't even use notes. I had to tell a personal story.

I paused. While I write stories all the time, what she wanted was way more intimate. I would be telling a room full of strangers about something I hadn't told many people I was close to. Telling a story is way different than writing one. There would be no delete button if I screwed it up. Once I said something, it would be out there and open for immediate interpretation. While I could pre-write it and try to memorize it, the project was about connecting through stories. I didn't want to sound like I was reciting a memorized verse. Telling a story is a gift you give to the listener. It is about them more than the teller.

As a storyteller, my job was to bring the listener into a world I knew and allow them to navigate it however they chose. Some people would be able to relate, others would try to do so and to others, it might be a trigger. Writing can do the same thing but as the writer, I don't see and cannot react to the reader. This would be different. I would stand on a stage, deliver a story from my heart and absorb the audience's response. To complicate matters, the venue was the same place where Warren proposed.

By the time I learned that little fact I had already agreed to the event and it added an extra layer of worry. Would I be able to stand in that place where I had once felt elation and excitement and tell of the pain of losing what had been envisioned when I said yes to his proposal? How was I supposed to stand in that space again and talk about loving another man? My stomach locked every time I thought about it and there were times when I started to email the reporter to tell her that perhaps I should wait until another time, at another venue to share that story.

It took many internal conversations and self-motivation to decide that I would not back down. I wanted to tell my story. I felt like it needed to be told. This voice inside my head reminded me that I was not the kind of woman who backed down from challenges. If I could plan Warren's funeral, I could honor him in this story. He is the reason I can love as I do and the story would center on that. I made it my goal to highlight hope, not loss.

As the weeks went by I wrote and re-wrote my story. I even told it to Warren one night as I looked at his photo and practiced. Looking at him while I told the story helped solidify that it wasn't a story about replacing his love. It was a story about continuing his legacy of love. Had he and I not loved one another as we did, my story would not be possible. It was that same love that drew my BF into my life and brought us closer. Thankfully, my BF had sensed this early into our relationship and the way he continues to honor that love and be grateful for it allowed me to tell a story that had multiple layers but at its core, was about how I was loved and how that love allowed me to love again.

Just before the host introduced me, I thought I would pass out. I took a breath and calmed myself down. When I walked on the stage my heart raced. I felt the lump form in my throat within the first minute of speaking. My family and best friend were there and I could feel their support. And of course, my new love was there. His presence helped push the lump aside and gave me the courage to tell the story. We took a chance on each other and opened up to what could be. That wasn't easy for either of us and I am proud of our courage. I wanted a story about hope, and when I think of us, I feel that. Our story has just as much weight as what I had. Telling that story was a gift to him and what we shared, just as Warren had given me a gift on that same stage thirteen years earlier. 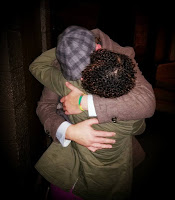 I got through the story and when I was done there was an intermission where I got to take a breath and calm my nerves. During that time I got a lot of accolades. People told me how much they related to the story and I was happy it resonated with the audience. Widows came up to me and thanked me for telling their story and shared how they had found love again. I was honored they shared their stories with me. One widow told me I was brave and I told her that she was, too. When the crowd had moved on to drinks and bathroom breaks I got the greatest kudos of all. My boyfriend's eyes were moist and filled with emotion. In his embrace the last of the nerves melted away and my heart found its normal rhythm. I knew he had received the gift.

Listen to the story here.
Posted by C.Fernandez-Morrow at 5:46 AM