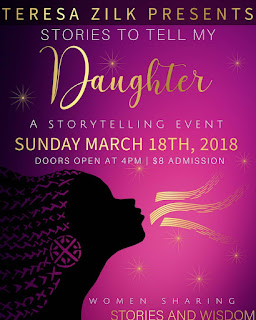 Over the weekend I had the honor of helping a local producer kick off her first event. It was special because it was woman with a vision and I love supporting women who go after their dreams. I was excited to be part of something that focused on women of color and is the first of its kind in my city.

When I was asked to participate the title: STORIES TO TELL MY DAUGHTER excited me. Raising a teenager is difficult and I believe it takes a village so it would be a great way to have other women impart their wisdom and experience on my daughter and give her a varied perspective. It was also something I wanted to share with my own mother.

I said yes without a story in  mind. I figured it would come to me as I learned more about the event. When I met with the producer and she explained her vision, a story began to form. The problem was, I didn't want to share that story. It was extremely personal in a way that would lay me bare in a setting much more intimate than my previous storytelling experience. This would be a smaller venue, the audience would be physically closer. My social circle crossed with that of some of the other storytellers and the producer so I knew there would be a lot more familiar faces in the audience. That was intimidating given the vulnerability I would have sharing that story.

I wish I could say that I had some brilliant strategy for coming up with another story. Unfortunately, my strategy was procrastination. I should have written out the story many times and went over the timeline and details. I did not. Instead I started reading two new books and tried to justify my fears and hesitations by burying my head in someone else's story. I kept asking myself why I had to tell that particular story. I gave myself no viable response other than that was the story I needed to tell. Period. For weeks I fought with my procrastination and ignored my inner-voice. Even as I resisted, the story formed in my head. Without trying, I had a beginning, middle and end. I had the theme and knew how to weave it in without writing it out.

Weeks of this immature behavior went by and before I knew it, it was the night before rehearsal. With no other story formed, I gave in and wrote the one that wouldn't leave me alone. It came easily, which became a blessing in disguise because it allowed me to try a different technique for preparing to speak. Rather than rely on notes and outlines, I recorded the story and listened to it over and over again. It was helpful to hear it in my own voice. I was able to focus on the pace, pauses, alliterations, repetitions and the inflections of my voice. With my focus on those elements of the story I was less worried about the content. I was still telling the story that my heart wouldn't allow me to ignore, but I found a way to be less worried about it.

At rehearsal I let it flow and was pleasantly surprised. It was more polished than I expected although I hadn't spent much time memorizing exactly what to say. The reaction of my fellow storytellers was reassuring. They each shared how they related to what I shared and how important it was to put that story into the universe. By the time I left rehearsal, I better understood why that story had been so stubborn. 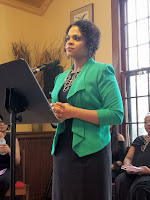 On the day of the event I was more nervous than I expected. I got to the venue an hour early and it helped to be in the space where I would speak. I generally don't feel a need to be in the space where I am speaking much more than a few minutes before I begin but it felt necessary in this instance. I envisioned the seats filled and how I would appear to the audience. I was glad that my mother, brother, daughter boyfriend and best friend would be there, although I had no intention of making eye contact with them for fear my throat would lock mid-story. 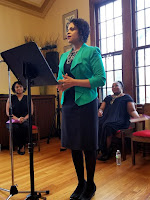 My stomach was a hurricane and my knees shook as the MC introduced me but once I got out the first line, all that melted away. I got through my story with no locked throat, no tears and no other mishaps. It was me and the audience and I felt electric and warm. I connected with the room and felt as though I was talking to close friends. That warmth carried through to the end of the event when audience members came to congratulate me. One person in particular smiled with misty eyes and hugged me, completely wordlessly. I did not know this woman but in her embrace I felt like I peeked into her story and intertwined my own to form a bond. It was a lovely and exhilarating moment between two strangers that also felt deeply personal and familiar. At that moment I shot up a little thank you to the universe for the courage to tell that story and not allowing my own fears to steer me away from what that women needed. It was a wonderful reminder that our stories truly are a gift to those who hear or read them and should be respected as such.
Posted by C.Fernandez-Morrow at 5:12 AM