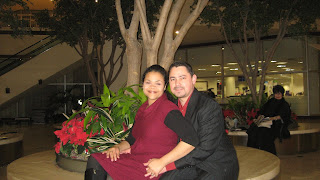 The eve of Warren's death happens to be Valentine's Day. I was never a huge fan of the holiday, other than I was born exactly nine months later so I guess I should be thankful for it. I had many Valentine's Days that were just like any other day of the week, whether I was single or not. As a wife, I honestly can't recall all our Valentine's Days together but I do remember our last one. We treated it like any other day because it was a Tuesday. Warren and I both worked that day, having had a date night the weekend before. After work I made our daughter a Valentine's Day box with some treats she liked, including a blue bath bomb she used that night. While she bathed Warren got home. It was some time after 7PM. He had a work event that evening where he wore his olive green suit. He took his final photo at that event, surrounded by colleagues, leaning on a crutch. He had torn his Achilles tendon and it was still healing from the surgery. His cast had been off for a few weeks but his foot wasn't ready for his full weight. He arrived home exhausted. He took a few bites of the dinner I had left for him but was too tired to eat any of the heart-shaped brownie my daughter and I had made for him. It was his favorite treat. His skin was pale with a tinge of yellow. I could tell by looking at him how tired he was. We laid in bed and something played on the television. We ignored it as we talked about our day and listened to our daughter play happily in the tub. At one point she called out, "Can we save this blue bath water so I can play in it again tomorrow?" We giggled at her request and he wrinkled his nose as he told her the water would be yucky by the time she bathed again. She kept playing and we enjoyed the quiet time together.

After goodnight kisses and tucking her in, we laid for a while longer, a mundane evening like any other.

That was our Valentine's Day after seven years of marriage. Today is the eve of seven years of living without Warren. I have been his widow as long as I was his wife. Just like our marriage, this time has flown by. So much pain has passed through these last few years along with so much joy. He has missed so much, from births to deaths, graduations and other milestones of those he loved most. Those are some of the most painful moments. Happiness is always tinted with sadness at the thought of not sharing these moments with him. People love to tell me that he is still with me, that he is a part of everything I do and I nod politely because they mean well but have no idea how hard it is to face these moments without him physically at my side - How I ache to see his smile, or hear his laughter or his voice guiding me through them. His spirit does little to fill the void he left.

Over the years I have become the master of pretending I am OK. And in many ways, I am. A few anniversaries ago I was the picture of anger. It burned from within. For other anniversaries I was numb, afraid and anxious for the mix of feelings I knew would come. I never know what set of emotions will abound. Often I dance between them, doing a back and forth salsa between extremes while functioning as normally as I can given the new normal that is my life. I can never not be his wife even as I move forward with my love life. He is never far from my thoughts even as I try to be in the moment. His example colors my actions even as I doubt whether he would do as I do. I live to make him proud while realizing that he will never have to face the challenges I have been left to handle. At times this new normal is a weight that drowns me and makes me a fighter. Other times it is the armor that gets me through when I think I can't handle something - a reminder that I've been broken and put myself together piece by piece.

Warren shaped me in ways I am still discovering and even in death he continues to influence my being, my thoughts, my view of the world. People who have never met him have talked to me of the impact he has made on their life and those who knew him help me keep his legacy alive. I see him in the smiles of my nieces and nephews, hear twinges of his voice in my father in law's stories. At the same time, the longing for his physical presence still stings at the center of my core, reminding me that my great love is a memory. On the eve of seven years post love-of-my-life I remain thankful to have a soulmate and that because of all he taught me I can say with confidence that while I am scarred and still healing, I am OK in more ways than I ever dreamed possible. My love is still strong but it bends towards him in a grateful arch of recollections, thoughts and life lessons I am blessed to have learned from a man who was made of pure love and compassion and who lives on in me every day.

Tomorrow will be hard. I will remember in exquisite detail the minutes of the day - from his last moments to my first as a widow. I may cry and feel anger, I may spend time in the fetal position. I might mindlessly snack on junk and be numb and I might laugh out loud at random flashbacks of silly moments. All this might happen back to back or over the span of hours. I never really know. All I know for sure is that anything I feel is OK, normal and exactly what I need. 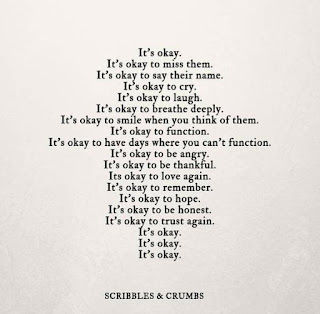 Posted by C.Fernandez-Morrow at 5:04 PM