The Year of Crystal

Fifteen years ago today, Warren and I said, "I do," in front of our closest friends and family. I was twenty-three, he was twenty-six. Long before he proposed I knew I would be his wife. I didn't feel pressured to marry him, although once he put a ring on it, everyone seemed in a hurry to see us walk down the aisle.

He came from pretty traditional stock so we didn't expect to live together before marriage. In fact, we bought a house together but lived in different states throughout our engagement. He got the house, filled with my parents and siblings as they adjusted to their move from Chicago, and I moved to Kansas City to pursue a position I loved with a global company. I wish I had the courage back then to slow us down a bit but given that we only got seven years of husband and wife, I am thankful that we went with the flow and were married a year after becoming engaged.

The actual wedding was the stuff sitcoms are made of. We planned an outdoor ceremony but an

unexpected storm nixed that plan an hour before the start time. Little mishaps popped up one after the other: the ring fell out of the box and rolled under the stage; the videographer loudly took a call during the ceremony and had to be escorted out; our parents forgot to remove the lasso from around our shoulders after the blessing so we had to shuffle around the stage, literally tied together! Warren and my dad started the day in urgent care because the yard work they did the day before led to a bad case of poison ivy and by the time we got off the flight at our honeymoon destination, I was burning up with a fever and red bumps on my arms, an allergic reaction to the poison ivy I contracted when I put on Warren's tuxedo jacket at the reception. All in all, I could write a book on all the things that went wrong on that day, and maybe I will but the thing I remember the most is recalling a conversation Warren and I had many times as we planned the wedding.


"This isn't about the party, it's about the marriage."

At the end of the day, all we wanted was to be married. We weren't concerned about the details of the ceremony or reception. Sure, we wanted it to be a memorable day for our guests because we loved them and were excited to bring them all together, but if a wedding hadn't been possible, we would have been more than OK. We wanted to share our lives together. We couldn't imagine not doing so. He was my best friend and it excited me to think that he and I would be a team for the rest of our lives. We had found our person in each other and were ready to start new traditions, make more memories and be the people we knew we could become with the other's love and support.

Looking back, I love that it gave me a funny story to tell and I find the whole thing very sweet but what sticks with me the most, is that we were determined that it wasn't about the wedding, it was about the marriage. That helped us laugh off the small debacles that made up the day and to feel thankful for every minute of that day. It wasn't perfect and we didn't expect it to be. The most exciting part was becoming Mr and Mrs. 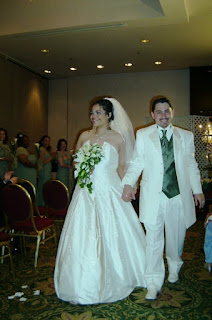 I have been asked on numerous occasions if I want another wedding if I ever remarry. My answer changes depending on the day but what I know for sure is that as long as I spend that day with the person I choose to be my person and who chooses the same in me, it will be about what happens after the party and the hope that we'll reach beyond the Crystal anniversary and spend many decades as husband and wife, something I wish I had with Warren.
Posted by C.Fernandez-Morrow at 6:52 PM