Waking in the West

I was part of a phenomenal group of women that got together at the beginning of the year with a vision. We wanted to create a space that brought women together for a weekend of healing and self-focus. In other words, we wanted women to put themselves first in a judgement-free zone for a few days where they could re-connect with themselves, bond with others and create new friendships.

It took almost a year of planning and getting the word out. Relying on word of mouth, we attracted one-hundred women to a campground about an hour from my home. They came from all parts of the state but some came from other states as well, which I had not expected. The women were all ages and from all backgrounds. There were stay-at-home moms, business owners, single women and married women. Their sexual orientations and gender expressions varied as did their ages and styles. I met women who were excited to be braless for the first time and others who don't own a bra. There were some who were new moms and others celebrating empty nests. I was excited to meet so many women at various stages in their lives and with so many talents. But even before meeting the women, the space we chose had me hooked.

The campground where it was held was like something out of the original Parent Trap, a movie that as child, I watched more for the camp scenes and my longing to experience something like that, and less for the plot or acting. It had acres and acres of trees, hiking trails and prairie fields bursting with deep reds, bright yellow and countless shades of orange. The cabins had twin-sized bunk beds and could hold ten to twenty women in each. They were fully heated and each one had a bathroom. The cabins were arranged in villages near the main gathering spaces. We all lived as neighbors, grouped around a fire pit with benches. Organizers and camp staff lit fires at numerous outdoor fire pits and indoor fireplaces throughout the camp, creating cozy spaces that smelled of burning wood - the unofficial smell of autumn.

Besides the acres of natural settings, there was lots to see and do around the camp. There was a hammock farm nestled on one of the banks of the creek so you could lay and listen to the calm of the flowing water, trails that ranged from easy to rigorous, a ropes course, and activities like horseback riding, archery, rock-wall climbing, kayaking, canoeing and my favorite: zip-lining. 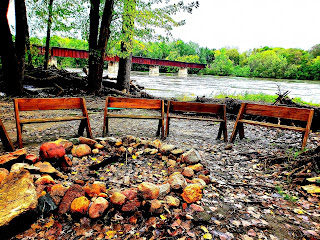 There were also massage therapists, a henna artist, Reiki practitioners and yoga instructors who shared their services and talents. Women also got to try Unlimited Breath, a practice where you use breaths to create states of relaxation and openness; forest bathing that combined nature, meditation and serenity; a creative confessional igloo where a photographer captured candid, personal moments; and a room dedicated to arts and crafts staffed by working artists.  All of these activities were run by women and the camp even enlisted as many female staffers as possible to assist with the weekend. Not that men were banned but it created a different feel when women were surrounded by women and that was one of the major goals of the weekend.

Additional highlights for me included the cafe we created when we asked women to bring a snack to share. When one-hundred women bring something to eat, you know you're eating well! There was sweet and salty, savory and crunchy and I loved trying new things and going back for more over and over again - remember, it was a judgement-free zone! That was for snacking. The weekend also included three meals a day, which brought all the women together to share some delicious meals that included a salad bar at every meal and the most delicious homemade Greek yogurt I have ever had. But I wasn't there just for the food, I swear!

Aside from helping plan and promote the weekend, I was asked to tell a story during the Trail of 5 Fires. Four of the fires were based on the four directions of the medicine wheel, with the 5th fire dedicated to Surrender. 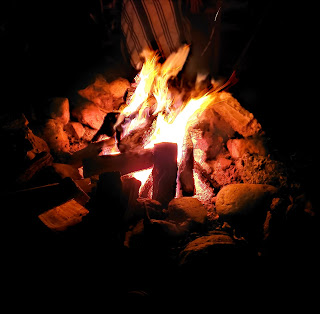 I was assigned the West and while at first I was stumped for what to say, when I looked at it more closely, it felt like the perfect fit for me. The West represents the setting of the sun, the darkness that comes at the end of the day. It also represents Fall and the place of the unknown, the dream state of the mind. As I researched it further, I learned about the teachers of the West, the Black Bear for strength and the Turtle for perseverance and physical healing. It got me thinking about how all those factors fit in my life. Here is what I shared as the smoke of the fire swirled around me surrounded by women who listened quietly, emanating warmth and acceptance.


When we emerge from darkness, we are reborn into light. I have been reborn so many times. The woman I am today was reborn of the women I've been in  my past. I have been reborn as a sister, friend, lover, wife, aunt and mother. These roles tested my mind, body and spirit to lift me into a new light with a renewed purpose and focus.

The West is the realm of water, without which we cannot survive. It is the only substance that can be liquid, solid (ice) and gas (steam), like the trinity of body (solid), mind (liquid) and spirit (gas). Healing requires a union of mind, body and spirit. One cannot be healthy while neglecting the other. Eventually the weak one will overpower the others. That is where the teachers step in: Black Bear for strength, the Turtle for perseverance. These are the pillars that lead you to a new tomorrow. When my body is taken care of I feel stronger in my mind. When my mind stops racing my spirit takes flight, lightening my load - whatever I am carrying.

On February 15, 2012 I was reborn from wife to widow. My life plunged into darkness the moment Warren collapsed in my arms and everything inside me told me what I did not want to believe - that he was gone forever. I spiraled into the unknown. I went from peace to chaos; from love to epic pain and sadness; from stability to uncertainty - and this was all within the first 24-hours.

As the fog of shock lifted, the guidance of perseverance kicked in and the Turtle guided my steps. Little by little I picked up pieces that had been shattered and mended them. I replaced parts of my being with the new me that was emerging in order to get through the pain. Together with the strength of the Black Bear I woke up on days I wanted eternal sleep. I let others help me when I wanted to wither away in fear.

Healing is a daily chore, an evolution. Losing Warren wasn't my only dark time in my life but it certainly was the most profound. I had to actively look for ways to get through so that I wouldn't lose myself. Each time that I allowed the Turtle and Black Bear to guide me, I moved farther from desperately broken to heroically healing. When I was open to their teachings my dreams became their portal for connecting with Warren.

He has visited me three times through my dreams. His first visit was the night I scattered his ashes. As I watched the sun go down over the ocean I felt a wave of peace so strong it awoke me from my doze. He let me know I had done the right thing by choosing to release him in one of his favorite childhood places.

Six months later he returned. This time his presence was more solid. Restless with anguish over going from two incomes to one and now to none, the worry of losing my job had exhausted me into an uneasy sleep. I felt his arms wrap around me. He was warm and comfortingly enveloped me, whispering, "I promised you that I would take care of you forever on the day we married and that hasn't changed. I am still taking care of you. It's going to be OK." I am usually a cynic but I knew that message was real, it was him. I felt less afraid and as I believed him in the flesh, so it was from another realm. He is my Black Bear, visiting me in times of need to renew my strength.

His latest visit came six years later. He quietly slipped into a dream and held space, not saying or doing anything. At first I was upset and questioned the visit. I hadn't been particularly stressed or scared. In fact, I had been making a concerted effort to live my best life and make time for myself. I was noticing the little beauties in life that grief had veiled. His visit startled and confused me. It took me out of my being. Then it hit me. His visit was not about my pain, it was about my joy. In life he had always told me that my happiness was his happiness and that I was his happy place. He had come to witness my happiness, to be a part of it. My joy was still his and his soul still celebrated mine. He is my Turtle, at my side to celebrate my perseverance.

The West is about emergence from the unknown to the known, the darkness to the light, the dream to reality. Under the direction of the Black Bear and the Turtle our wells are replenished and we feed our mind, body and soul so that we can be born again and again. 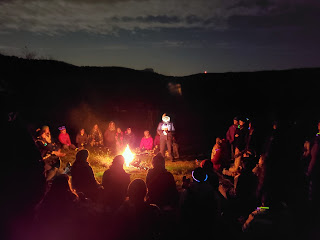 Posted by C.Fernandez-Morrow at 8:00 PM