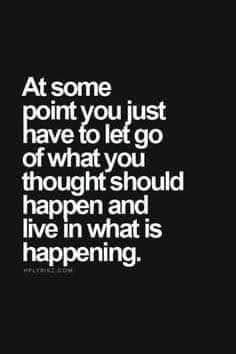 As a child, when I pictured my future, I was a teacher; a flight attendant; a businesswoman with a corner office among the clouds, far above the streets of New York. I wore heels and the latest fashions and owned a modern, minimalist condo that I shared with my husband and cute little dog. My weekends were full of cocktails, dining out and the latest Broadway shows.

My life looks nothing like that and it has taken me over two decades to come to terms with how my life has turned out.

Part of the problem is that I didn’t update my vision of my life as it unfolded. Since I thought I had done everything to lead towards what I wanted - I had the business degree, savings, a strong network and a businessman husband. I figured that the rest was coming because I had been aligning everything just so. What I hadn’t accounted for was all the other elements of life that were working against that vision. I kept trying to re-shape my life into what I thought it should be but life had other plans. Have you ever tried to control the direction of a sled as it glides over the snow down a hill? That’s what it felt like. I was trying to control the sled but the sled was going where the snow allowed. It wasn’t a crazy ride, but it definitely had its own path that I could see but was unwilling to trust as the best path for me.

Rather than enjoying the life that was right in front of me, I kept looking past it to what wasn’t.

I had more than I had envisioned but I couldn’t see that because I only focused on what was missing. By constantly doing that, I was robbing myself of happiness for no good reason.

Don’t get me wrong, I have a good life, it just doesn’t look like what I convinced myself it would look like since I was a child. For starters, my career took me all over the Midwest but not to the Big Apple. Sure, I could have applied for positions in New York but it would have required me to give up homeownership and the comfortable lifestyle I was accustomed to - void of subway trains and long commutes; high prices and small living spaces. While I held on to the thought that was the life I wanted, it was only an illusion because in truth, I wasn’t willing to sacrifice what I had for what it would take to make it look like what I envisioned.

While I had many offices, none were corner offices with huge windows that looked down on a bustling city that never sleeps. In fact, my time in Corporate America was nothing like I expected and I was much happier when I left that grind behind. When I pictured myself as a business tycoon, I failed to consider that I was a young woman of color and how that would impact the professional ladder I needed to climb. And the clothes and high heels I thought I’d wear to climb that ladder? No way! I grew to prefer comfort over stuffy pantsuits and shoes that contort my feet. Even while I accepted this about myself, I mourned for the life that had stamped itself in my head so many decades ago.

As the pieces of my life came together, I resisted. I failed to appreciate what I had in hopes that it would morph into what I thought I wanted. That left me feeling empty inside; like a failure to myself and therefore, a failure to everyone. It led to bouts of depression, dissatisfaction and daily negative self-talk. I was never good enough. Never enough. My accomplishments felt minor and I didn’t take pride in what I achieved, no matter how much blood, sweat and tears it took to get it done. For years, this was a shadow over my life. In the midst of everything else, it loomed, like a storm cloud.

When the pandemic came, I spent a lot of time at home. Like many, I made improvements to my home and transformed certain spaces into places I wanted to be. I also formed a pod of people I trusted enough to spend time with on a regular basis. In the midst of millions losing their jobs and homes, it opened my eyes to what I had actually built for myself, and how easily it could have had a negative outcome. Several events highlighted how fortunate I was for the life I live. It dawned on me that what was keeping me from reaching a genuine level of happiness and gratitude for my life was the outdated vision I held on to about how my life should look. While it still held the glamor and wonder from when I first conjured the thought, I realized that I had outgrown that scene. There was no way that I would willingly give up the life I had for the one I thought I wanted. It took deliberate acceptance to get to that realization and it wasn’t easy to embrace.

First, I had to let go. But that isn’t easy when you’ve engrained it into your psyche that your life can only be successful if it looks a certain way and that everything else is either a step in that direction or a roadblock. As much as I realized that I had created an even better life for myself than the one I imagined, it was a sad realization. It felt unfamiliar and like a cop out to accept things as they are.

If I was no longer working towards what I thought my life should be, then what was I doing with my life?

To be honest, I don’t have an answer. All I know is that what I have is good. The most glaring omission from the life I envisioned all those years ago was the people in it. Aside from a husband, I hadn’t thought about friends or any kind of support system. Yet, that is what helped me realize how good I have it. Looking at all the people in my life who were checking on me; inviting me to socially distanced get togethers in parking lots and in parks; including me in group chats and virtual game nights; those with whom I explored Zoom and got re-connected. They are the substance in my life, they make up the pieces I hadn’t counted on that are more valuable to me than all the corner offices overlooking all the cities in the world. Through those relationships I am embracing what is and seeing it for the gift it is, rather than all the ways it doesn’t resemble what I thought I wanted. Remembering how those relationships have been the glue that held my soul together during this dark and uncertain time has been the jolt I need to re-evaluate and allow myself to accept what is and the peace to release what wasn’t meant for me.

Posted by C.Fernandez-Morrow at 11:55 AM