Loving Myself Radically and Intentionally 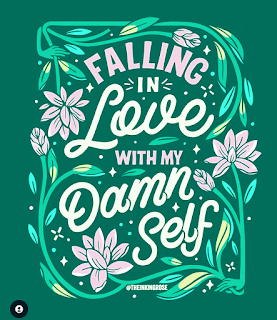 Throughout my life, I have had a love/hate relationship with myself. Early on, it was almost always hate and most of it was physical. I hated my curly hair that set me apart from the beauty standards I saw. I hated my nose and the beauty mark under my lip, and I especially loathed my weight and being called gordita. While it was said as a nickname and with cariño, being “the little fat girl” led to some of the darkest moments of self-hatred of my life.

I even hated things about myself that would be considered good, like having 20/20 vision. For some reason, I wanted glasses SO badly as a child. Maybe it coincided with my feeling of being a nerd, but glasses somehow fit how I saw myself and I hated that I didn’t need them. I was ecstatic when my cousin gave me a pair of non-prescription glasses from her job at Pearle Vision. They were extremely hideous and unflattering on my round, chubby face but I didn’t care. I was so excited to finally have glasses that I wore them to school. I was in third grade and not particularly popular so I don’t recall any of my classmates noticing my new look, even though I was bursting with excitement. My teacher must have acknowledged them in some positive way because I remember feeling guilty, like a fraud because the glasses were not for improving my vision. I was so wracked with guilt that I asked to speak to her privately. I wrung my hands together, stumbled over my words and took deep breaths to keep from puking as I confessed that the glasses were fake. This was before fashion glasses were a common accessory and I felt as though wearing them was somehow tricking my teacher into thinking I was someone I wasn’t. While I don’t recall what made my eight-year-old brain jump to that conclusion, the feeling of regret is still clear and I never wore those glasses to school again.

Instances like that made me feel ugly on the inside as well. I attended a religious school and my family went to church regularly where I was told that my thoughts should be positive and pure. Mine were far from that. I was judgmental and jealous as a child and my thoughts reflected it. Therefore, I concluded that I was as ugly on the inside as I was on the outside. Without realizing it, those feelings manifested into one of unworthiness, not feeling deserving of love; interpreting kindness towards me as pity and fearing that one day all the positives in my life would be driven away by my ugliness.

I don’t recall loving anything about myself except my academic prowess. In school I excelled and it led to positive attention from the people I loved most. While doing well academically is a good thing, I took it to the extreme. I felt like it was the only constructive thing about me so I overcompensated in that area of my life. I felt sick to my stomach thinking that I might get anything lower than a B, no matter the subject. I spent hours memorizing materials, making sure my assignments were as close to perfect as possible and stressing about my grades and academic performance. This persisted from elementary school through high school. While it opened doors for me, it was also an obsession. I gave myself zero grace for failures, and had to be top of my class every year, no matter what. I attended a highly competitive college prep high school so my feelings of inferiority intensified in that environment of wealth and microaggressions.

Thankfully, college turned things around for me. For so many years I had such razor-sharp focus on getting into college that achieving it felt like I had conquered a mountain. For the first time that I could recall, I felt like I had earned a place in the world. It carried over into my self-esteem in many ways, allowing me to make lots of friends and a ton of wonderful memories. But I was far from loving myself. In fact, it was when I struggled the most with my looks. During my undergrad years my eating disorder spiraled out of control and even at a size 4 and dating “popular” athletes, I didn’t feel pretty. The hate still outweighed the love and I fed and purged it in secret for years.

College graduation was another milestone that gave me more of a sense of purpose and worthiness. It was the end game to what I had been working towards. It helped me see myself as a go-getter who didn’t give up and I loved that in others and began to love that about myself. But loving oneself is so much more than warm baths and indulging in decadent desserts as a treat. It meant getting help for my eating disorder, one of the scariest things I had faced in my young adulthood. It was ugly and painful but I needed that tough love from within to really turn my life around or I was going to have serious, life-long consequences.

As I worked on my health, I met a man who loved me in a way no one had ever loved me. It was whole and genuine and I felt completely undeserving. His love was also relentless and I had no choice but to take notice. I admired and respected him so much that I began to believe what he loved about me. He saw so much more in me than I had ever seen in myself. I learned so much about being loved that it influenced the way I love myself. How could I love myself less than he did? That didn’t make sense to me.

Healthy self love didn’t happen overnight or in the course of our courtship. It has taken decades and continues to evolve. Knowing that I could be loved so fiercely and unconditionally changed how I viewed myself. Paired with the tough love I had practiced in order to move away from my eating disorder, I began to love myself deliberately. It was a conscious effort to let go of guilt I had no business carrying. It allowed me to create space for myself in places I had formerly felt undeserving to occupy. I began apologizing less for things that truly didn’t call for an apology, and I took steps towards finding true joy in the things I pursued.

Prioritizing myself is way out of my comfort zone so it often feels uncomfortable, as though I am rebelling against my nature.

For so many years I spun my wheels trying to be the person everyone wanted me to be and never feeling accomplished in that. Yet, being myself had attracted an extraordinary person into my life when I least expected it. Little by little I learned to accept myself as he did and realized the value I brought to his life. That realization was empowering. It set the stage for a gentler form of self love that began to form inside me. Just because it was gentle, doesn’t mean that it’s easy or painless. In fact, it is the complete opposite. Prioritizing myself is way out of my comfort zone so it often feels uncomfortable, as though I am rebelling against my nature. It hurts, but the pain is temporary and the gains are immense and timeless.

Loving myself doesn’t mean that I feel like the best or better than anyone else. It means that I know I am better than the person I was yesterday and that is my reward. It’s a work in progress every day to be as kind to myself as I am to others and to give myself the same grace I am quick to extend to those I love. It is radical way of thinking that has come with age, experience and awareness. Loving myself means constantly reminding myself that I can love myself enough so that I don’t need anyone else to love me, but that when I love myself with abandon I also attract love. Being conscious of the people who show love and seeing it for what it is has been one of the biggest gifts I’ve gotten from loving myself. It has highlighted the many ways one can be loved that has nothing to do with romance or sex, relationships or bloodlines, but is just as fulfilling and validating.

Years ago, when someone told me they loved me my first thought was to wonder why and brush it off in incredulousness. Today, I embrace it and think, “Yea, I love me, too.”

Posted by C.Fernandez-Morrow at 11:57 AM